Cooperation of the academies of sciences of the Baltic States

The Latvian Academy of Sciences continually maintains friendly cooperation with the Estonian Academy of Sciences and the Lithuanian Academy of Sciences. The three academies of sciences have signed a trilateral agreement on scientific cooperation. The academies maintain regular contacts for exchange of information and views, and besides that the agreement stipulates scientific exchange visits thus supporting groups of researchers to carry out smaller joint projects and individual scholars in performing work in the archives and libraries, and attending scientific events. Alongside with supporting and financing international mobility of researchers within the Baltic, the Latvian, Estonian and Lithuanian academies of sciences, as well as Finnish colleagues, meet regularly at the Baltic Conferences on Intellectual Cooperation and rotate the location of these meetings. It is customary that during these conferences the Medals of the Baltic academies of sciences are awarded.

Medal of the Baltic academies of sciences

According to its Statute, the Medal of the Baltic Academies of Sciences is awarded for contribution to promoting cooperation of the Baltic States and for achievements in science. Since 1999, the awarding ceremonies of this special international award of the Baltic academies of sciences have taken place six times and 23 medals have been awarded (as of 01.06.2012). The wording on each Medal diploma is different, but one feature they all have in common is the great contribution to fostering cooperation among the scientists in the Baltic region and to carrying out joint research.

The 1999 Conference took place at the time when the Baltic states were gradually moving towards accession to the European Union (EU) and with the concept of the Baltic region as a building bloc of the New Europe, the conference concentrated on two key issues: historic aspects and future perspectives for the cooperation of Baltic States and protection of intellectual values and science through mutual cooperation of legislators, governments, mass media and scientists. Quoting Stradins, president of the Latvian Academy of Sciences: "The academies of sciences bear a special mission and special responsibility of motivating and maintaining the unity of our Baltic States, and taking care that intellectual values are honoured in the region". The Conference saw the participation of representatives of the Baltic States, Finland, Sweden and Norway. The unofficial white-red-yellow flag of the Baltic (each stripe coming from the flags of Estonia, Latvia and Lithuania, respectively) was exhibited to the participants.

In 2001, the 8th Baltic Conference on Intellectual Cooperation took place in Tallinn, and at this conference three subjects were taken to the foreground: the message to the world aimed at raising the awareness about the historical experience of the Baltic States, research strategies in small countries, and the humanities during the past decade. It was distinguished by a wider representation of the countries around the Baltic Sea.

In 2003 (10 June), the 9th conference took place in Vilnius, with the theme was "Globalization, Europe and National Identity". A lot of attention was given to the science and culture of small countries. The Conference was organized by the Lithuanian Academy of Sciences and was attended by participants from as many as eight Baltic countries.

In 2005, the 10th Baltic Conference on Intellectual Cooperation (BCIC) took place in Helsinki, with the theme „The Baltic: Past, Present and Future". The four conference sessions dealt with history and politics, the Baltic Sea as a body of water and scientific collaboration around the Baltic Sea.  The conference was organized by the Finnish Academy of Science and Letters

In 2007 (9-10 October), the 11th Baltic Conference on Intellectual Cooperation took place in Riga, with the theme "Academic Views on the National Development Strategies of the Baltic States". It was organized by the Latvian Academy of Sciences, and assembled the delegations the Estonian Academy of Sciences and the Lithuanian Academy of Sciences, as well as the Finnish Academy of Science and Letters, the Delegation of the Finnish Academies of Science and Letters and the Royal Swedish Academy of Sciences. The Conference plenary speakers highlighted all dimensions of sustainable development: environmental, social and economic, whereat the latter was primarily related to the energy sector, which is vitally essential for the three Baltic States. Further, the conference discussed the ways how academia could contribute to closer collaboration between scientists of our countries in the frames of European Commission research programs and to collaborative research within the programs realized by various European research organizations. The 11th BCIC (2007) passed two resolutions dealing with the advancement of science and scientific cooperation: (1) Resolution on Baltic Energy Issues, (2) Resolution on the advancement of science and the humanities in the Baltic countries.

In 2010 (4-5 November), the 12th Baltic Conference on Intellectual Cooperation took place in Vilnius. The theme of the conference was "Science and Society" and it was organized by the Lithuanian Academy of Sciences. The delegates of the three Baltic academies of sciences, the Federation of all European Academies of Sciences, ALLEA, and the Finnish Academy of Science and Letters met in Vilnius. The conference deliberated on a wide range of topics and passed a resolution setting the targets to be followed by the academies: (1) to influence policymaking with the best scientific advice; (2) to engage in an open dialogue with various interest groups over sensitive and controversial issues, as cloning, genetic modification, etc.); (3) to educate the public through informal means and to strengthen the science communication skills of the academies' members and (4) to encourage young people to pursue careers in science The Conference included the customary awarding of the Medals of the Baltic Academies of Sciences. The Conference adopted a Resolution on strengthening the advisory role of science in policy-making and policy evaluation that set out the following targets:

To influence policymaking with the best scientific advice;

To educate the public through informal means and to strengthen the science communication skills of the academies' members;

To encourage young people to pursue careers in science.

On 28-29 January 2013 the 13th conference in the series of the Baltic Conferences on Intellectual Cooperation took place in Tallinn. The theme of the conference was "European Research Area and Small Countries". The conference was organized by the Estonian Academy of Sciences. The opening address was given by President of the Academy Richard Villems. The conference papers covered the topics on the European Research Area, global processes in science, role of the national academies of sciences, cooperation among the scientists of the Baltic States, Baltic Sea States and Europe (Baltic studies, role of the diaspora), development of the science in different areas (biodiversity studies, materials science).

The 14th Baltic Conference on Intellectual Cooperation was held in Riga on 20-21 April 2015. The theme of the conference was "Academies of sciences for research and innovation: Past and future". Among the participants at the conference besides Baltic States' scientists were also representatives from Germany (Bärbel Friedrich, Vice President of Leopoldina), Norway (Øivind Andersen, President Union Académique), Poland (Maciej Janowski, Professor, Polish Academy of Sciences) and Slovakia (Dušan Gálik, Scientific Secretary, Slovak Academy of Sciences). The topics discussed at the conference covered issues on policy advice in a world of global challenges accentuating the role of national academies, scholarly cooperation in the humanities through academic networking - in the Baltic region and globally, cooperation of research, technology development and innovation in Baltic Region, Baltic economic growth in cross-temporal comparison: inter-war and restored independence periods, dependence on EU Structural funds in the Baltic Countries et alia.

15 Baltic Conference on Intellectual Cooperation "The Future of Teacher Education in the Baltic Region: Towards Research Based Teacher Education" took place in Helsinki, Finland on March 30 - 31, 2017

In the Pre-conference meeting each of the Baltic countries shortly presented the recent developments of the National Academies, cooperation of the Academies in the Baltic region and the main future challenges.

Conference offered a forum for science policy discussion on teacher education and training. Participants have discussed issues related to changing status and potential lack of teachers, decreasing status of teaching profession, social differentiation of the society and it's impact on the level of knowledge and education (Prof.J.E.Gustafsson, University of Gothenburg, Sweden). Professor Pertti Kansanen had discussed the major issues concerning the role of research in teaching profession, innovative practices and educational policies. The keynote speakers Professor Vincentas Lamanauskas (Faculty of Educational Sciences and Social Welfare, Šiauliai University), professor Eva Eisenschmidt (Tallinn University School of Educational Sciences), Jari Lavonen (Helsinki University) emphasized very important aspects of teacher education in the Baltic countries. It was discussed how does a student teacher and teacher beginner become a reflective practitioner and what steps should be made to reach that.

Several projects were presented on teacher training perspectives in Finland, Estonia, Latvia and Sweden. The project Next-Lab (University of Turku) invited partners from Latvia to participate. The presentations of the conference are available at the Conference website.

It was decided that the next - XVI Baltic Conference on Intellectual Cooperation will take place in Lithuania in 2019.

16th Baltic Conference on Intellectual Co-operation "Genes: from the Past to the Future" to be held in Vilnius, 2-3 May 2019

16th Baltic Conference on Intellectual Co-operation "Genes: from the Past to the Future" will take place at the Lithuanian Academy of Sciences (Gedimino Ave. 3, Vilnius) on 2-3 May 2019. Preliminary registration via e-mail is appreciated.

The famous Human Genome Project, launched in 1990 and accomplished in 2013, was a major challenge, a great achievement, and a fascinating part of the never-ending human quest for knowledge about ourselves. Although the 1990s was the time when national research systems of the Baltic countries were facing extreme challenges, new exciting opportunities were there as well.

Nowadays genetics permeates biomedical research in the Baltic countries. Genetic identification of historic persons, modification of genes for selection and biodiversity, genetic medical diagnostics, development of gene modification tools are commonly performed tasks. Our proximity to world-class science here is an indicator of what we have achieved.

This year's conference in Vilnius is mostly focused on biomedical sciences, but it will not be confined just to them. The presentations of the first day of the conference will focus on the impact of modern genetics and genomics on plant selection, medical practice, and the emergence and development of novel scientific disciplines. The ways of how the latest achievements in genetics and genomics are changing the perception of the history of human populations will be demonstrated on the example of Lithuania on the second day of the event.

The latest technologies of biomedical research - bioinformatics, medical biotechnologies, genome editing tools for the analysis of the human genome - enable research into and the development of ethnogenesis-related issues. Studies into variations in DNA sequence make it possible to reconstruct the evolutionary history, origin, and structure of the human populations and to detect differences and similarities between individuals or populations. Demographic changes leave a trace in a population by changing its genetic diversity. Therefore one can assert that our history is encoded in a DNA sequence. Modern ethnogenetic research is developed by collating archaeological, genomic, and linguistic data. Comparison of results produced by separate branches of science is interesting to the general public as it facilitates a better understanding and clarification of the theory of the origin of nations.

Winners of the Baltic Assembly Prize in 2019 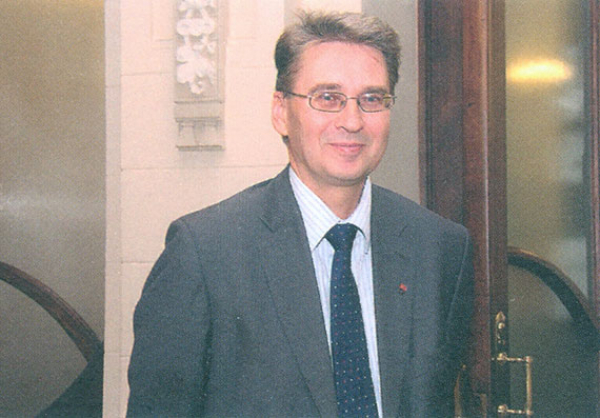 The Baltic Assembly prize in science was awarded to Jūras Banys (Dr.Hab. in Physics, President, Lithuanian Academy of Sciences), received the award for his outstanding contribution to research and innovations in ferroelectricity and phase transition as well as his devout leadership and professional scientific achievements.

The Baltic Assembly prize in literature was awarded to Leelo Tungal (Estonia), writer, for her autobiographic trilogy "Comrade Kid" (Tänapäev, 2018), with a special emphasis on the last book of the series "A Woman's Touch" (Tänapäev, 2018), where Stalin's era is depicted through the eyes of a child

The Baltic Assembly prize in literature was awarded to Normunds Šnē (Latvia), conductor, nominated for the performance at the concert in honour of 100-year anniversary of the Baltic states in the prominent Baltic Sea Festival in Stockholm's Berwaldhallenon August 28, 2018, with Sinfonietta Rīga and Tallinn Chamber Orchestra.