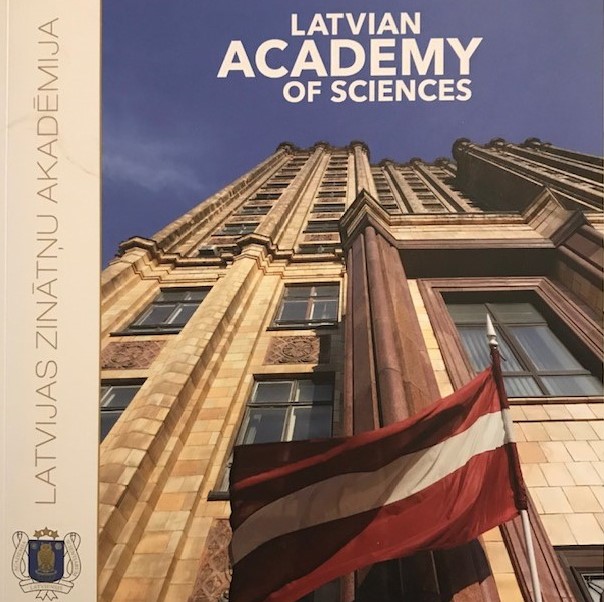 In 1815, the war with Napoleon had ended. The teaching staff of the Academic Gymnasium (Academia Petrina) at Mitau (present Jelgava, Latvia), or the Mitau Distinguished High-School (Gymnasium illustre), once they recognised that the decision to establish a University had been taken in favour of location at Dorpat (present Tartu, Estonia), nonetheless did not wish to remain outside academic, scholarly society. This consideration led to the Courland (Kurzeme) Society for Literature and Art (Kurländische Gesellschaft für Literatur und Kunst) being founded in 1815; the event may be seen as the first attempt at creating an academy of sciences in the Baltic region. Certainly the year 1815 cannot be seen as the beginning of today’s Latvian Academy of Sciences, yet it marks the beginning of the concept of such an Academy.

The real Academy of Sciences of Latvia was established after the end of the Second World War, in 1945–1946, under the conditions of Soviet occupation. A number of distinguished Latvian scholars and scientists were among those who gathered on 14 February 1946 for the first annual general meeting, namely linguist Jānis Endzelīns, forestry specialist Arvīds Kalniņš, micro-biologist Augusts Kirhenšteins, agriculture specialist Paulis Lejiņš, agro-chemist Jānis Peive, medical scientist Pauls Stradiņš and others. A new generation of Latvian scientists grew up in the post-war years and new directions of scientific investigation were developed – magneto hydrodynamics and solid-state physics, astronomy, mechanics of polymers, wood chemistry, development of new biologically active substances (pharmaceuticals), molecular biology, virology, elaboration of material technologies for space applications. The 1990s marked the collapse of the Soviet Union and re-gaining of the independence of the Republic of Latvia, and in 1992 the Latvian Academy of Sciences was transformed into a European-style academy that unites eminent scientists and scholars, elected members, that is supported by the state, with the aim of furthering the advancement of science in Latvia, discussion of urgent problems and is engaged internationally.

Transformation of the Academy of Sciences and accomplishments in Latvian science, by Prof. Jānis Stradiņš

When the Republic of Latvia regained its independence in 1990/1991, a certain contribution in this process was also given by the progressive AS staff, and a logical problem arose: what shape should the Latvian Academy of Sciences take in these new conditions. This question arose not only in Latvia and its two neighbouring countries Estonia and Lithuania, but also in other post-communist countries of Eastern Europe, where the Academies of Sciences had functioned similarly to that of the USSR. In two countries, where the former Academies of Sciences had been too closely bound to the old regime (the German Democratic Republic and Czechoslovakia), they were dissolved, while in other countries — transformed, giving autonomy to their institutes or incorporating them into universities. The three Baltic republics independently of each other chose the Nordic model — the academy of individual members, without institutes, the so-called personal academies, associations of leading 8 scholars and scientists, even though Western Europe has a number of countries, where the Academies of Sciences do have institutes (e.g., Austria, the Netherlands). The overwhelming majority of the scientific community in Latvia was against the Academy acting as a “ministry of science”, supervising its subordinate institutes and allocating funds to them.

In Latvia, the dispute about the academy of sciences started in 1989 and went on until 1992, to some extent, even to the late 1990s. The name of the Academy was changed to the Latvian Academy of Sciences (the LAS) in March 1990, the academic staff had to be upgraded to enable the transformation of the existing Academy. Part of the members united by the newly established public organisation — the Latvian Union of Scientists (founded in 1988) insisted on liquidation of the “old” Soviet Academy and foundation of a new national Academy of Sciences (without institutes). Such a solution would annihilate the previous 45 years of existence of the Academy of Sciences in Latvia. The new Academy would have lost claim to such outstanding Latvian scholars as academicians Jānis Endzelīns, Paulis Lejiņš, Pēteris Stradiņš, Augusts Kirhenšteins, Gustavs Vanags, Alfrēds Ieviņš, Solomons Hillers, Arvīds Kalniņš, Lidija Liepiņa, Artūrs Krūmiņš, etc., the continuity would be interrupted, and the members of such a “National Academy of Sciences” could, most likely, be appointed or elected according to somewhat subjective criteria.